Stocks were up by 1.82% in the US and 1.73% x-US. The overall US market is almost exactly even with the closing price one month ago on June 10th (up by 0.0018%). The Nasdaq Composite has been keeping the overall US market above water, that index is up by 7.4% during that period, helped by companies like Tesla, which has advanced by 50.7% over the last month. Tesla now has a market cap of $224 billion, worth more than all of the other auto companies combined (excluding Toyota). 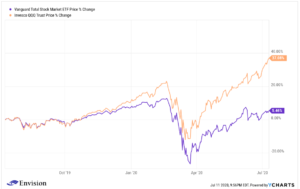 The White House and Congress are working on another stimulus bill that they hope to pass by the end of July. The economy might need it, as it seems to be losing momentum due to the expanding coronavirus. Retail and restaurant traffic is falling in key states like Florida, California, and Texas. At the same time, more layoffs could be on the way. United Airlines might layoff up to 36,000 and American Airlines says it has 20,000 more employees than it needs.

But for at least last week, the employment report was favorable. New unemployment applications fell by 99,000 to 1.3 million for the week ending July 4. Applications have been falling since mid-March. However, as means of comparison, the highest number on record prior to this year was 695,000 in 1982. As of June 27, there were 18.1 million receiving unemployment benefits, down by 700,000 from the prior week.