Stocks moved into record territory as the US up by 1.55% and international stocks advanced by 1.30%. As anticipated, the Fed cut rates by 1/4% and a strong jobs report indicated that a recession does not appear in the cards for at least the very near term. On the other hand, the Chicago PMI came in at a dismal 43.2, the lowest level since December of 2015, but that number might have been impacted by the GM strike. Q3 GDP growth came in at 1.9%, it was the third straight drop in growth, 10 basis points off the Q2 number. The early GDPNow estimate for Q4 is 1.1%. 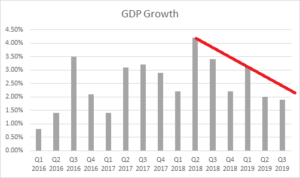 The Fed cut interest rates for the third time in 2019 by 1/4 point. The move was widely anticipated by the markets. The Fed indicated that there would need to be a deterioration in the economy for another rate cut.

The US jobs machine put in another strong month, lodging an increase of 128,000 in nonfarm payrolls, and that was after a decline of 41,600 due to the GM strike and 20,000 temporary census workers leaving their jobs. The two prior months were revised up by 95,000. The unemployment rate increased to 3.6% as more Americans entered the workforce. Average hourly earnings were up by 3% year over year.

Through Wednesday, about 75% of S&P 500 companies have reported earnings and 75% have beaten expectations. However, overall profits are forecast to fall by 3.2% from last year. That would make it three quarters in a row of declining earnings. Analysts are expecting positive earnings growth in 2020 and 2021 of about 6 and 7%, respectively, although those estimates will probably come down.

Last week the Treasury Department reported that the budget deficit for the year ended 9/30/2019 was $984 billion, up 26% from the prior year. Tax receipts were up by 4%, while outlays were up by 8.2%. This is now the fourth consecutive year of an increasing deficit and the current shortfall was 4.6% of GDP, which is the largest amount excluding a war or a recession. The worst part is no one in Washington seems to care, under the guise that deficits don’t matter. The risk is that at some future point they will matter, and by then it will be very difficult to deal with.